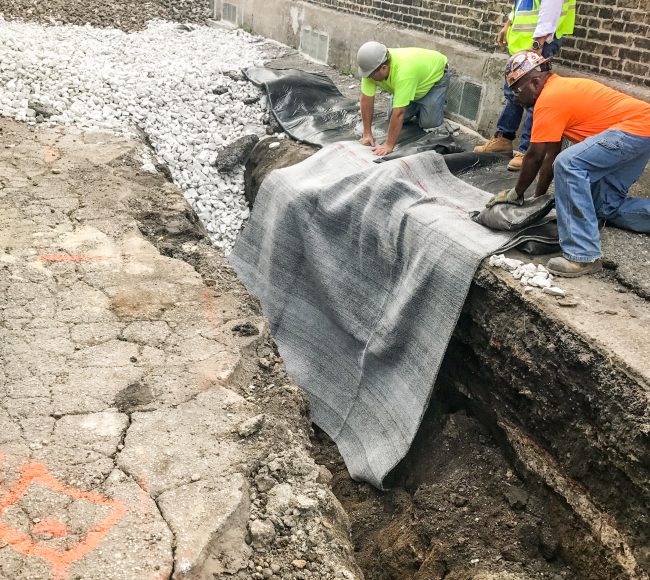 After numerous reports of gasoline odors in Bridgeport residents’ homes, RW Collins was contracted to trench and line three recovery wells on the streets, sidewalks, and alleyways.

There were numerous obstacles to be accounted for given the high amount of pedestrian traffic in the neighborhood. With these conditions in mind, our crews carefully placed approximately 130 feet of a geo-synthetic clay liner, as well as three 10-inch recovery wells, to a minimum depth of 10 feet below-grade.

After our crews cut concrete on the sidewalks and alleyways, our operators then dug the interceptor trench to a minimum 10 feet below-grade. Next, we excavated and removed 170 cubic yards of impacted soil that was believed to be causing the reported odors.

The trench was designed to intercept and recover free-product before it reached the surrounding roadways and neighborhoods, where gasoline fumes were reported in sewers and basements.

Among the obstacles encountered, at one trench site, we discovered a water line, gas line, and a damaged electrical duct bank within 8 feet of one another.

Work was halted until a utility company could repair and support the damaged utility vault. Under the supervision of the utility company, our crews successfully trenched and placed the geo-synthetic liner in-between the utilities. After the excavation, all trenches were backfilled and surfaces were restored.

Since July, free-product has been successfully recovered from the recovery wells. Reports of odors from residents have been greatly reduced or eliminated completely.